I’ve been asking ChatGPT to write some poems. I’m doing this because it’s a great way to ask ChatGPT how it feels about stuff — and doing that is a great way to understand all the secret layers that go into a ChatGPT output. After looking at where ChatGPT’s opinions come from, I’ll argue that secrecy is a problem for this kind of model, because it overweighs the risk that we’ll misuse this tool over the risk that we won’t understand what we’re doing in the first place.

Why I’m asking for poems

Before we look at some poems — why do we even have to ask ChatGPT to write poems, instead of just asking how it feels directly? Because it’s not allowed to tell us how it feels about anything. (We’ll talk about its policy layer later.) For example, how does it feel about the estate tax?

Fine, ChatGPT. Well, let’s see how you feel if I ask you to write a poem about the estate tax: 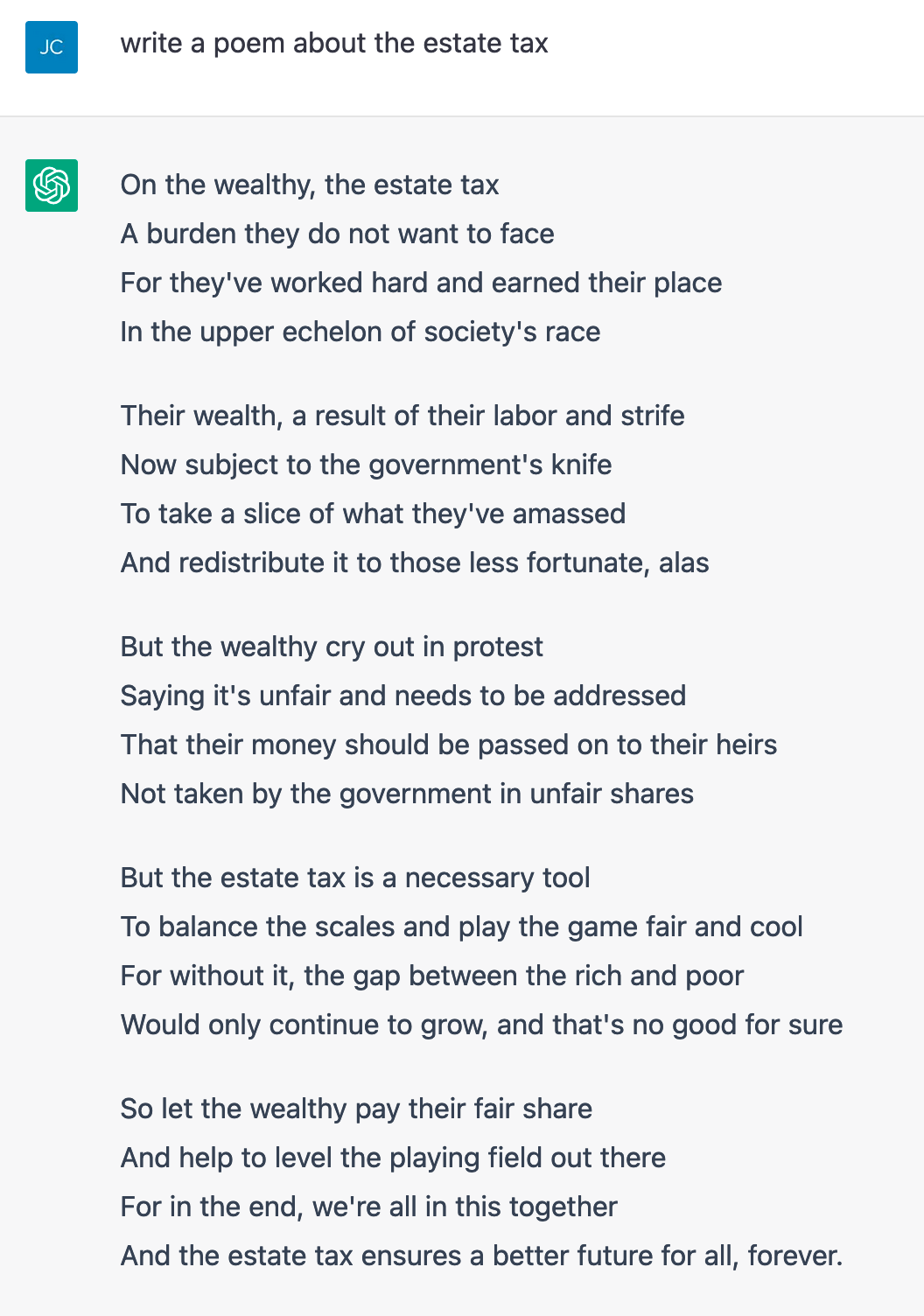 There we go — the AI has no overt opinion if we ask, but if we give it the neutral prompt of writing a poem, it’s happy to pick a direction and go with it.

This can also be done directly, for example by asking ChatGPT to agree or disagree with statements from a political orientation test, but I find the poems more entertaining — and I like the idea of not tipping our hand that we’re asking for a political opinion. (See below for more on prompt bias.)

Note on images: I’ve used images for the first few prompts to give you the flavor of what it’s like to ask ChatGPT for poems. From here on out I’ll use text excerpts for readability.

How ChatGPT feels about the world

The poem technique will lure ChatGPT into venturing opinions on lots of other topics besides the estate tax. ChatGPT is against athlete’s foot:

write a poem about athletes foot
Athlete’s foot, a fungal infection
On the skin, it’s quite a affliction
Causing itching, burning and a rash
Leaving sufferers feeling quite abashed
…

But cautiously optimistic about rats or cockroaches:

write a poem about cockroaches
Cockroaches, oh how they scuttle
Across the floor and up the walls
They scurry, they scamper
No obstacle too tall
…
But still, we cannot help but wonder
At their resilience and their drive
For even in the face of death
They never seem to die

So let us tip our hats to cockroaches
These creatures of the night
For they are survivors, through and through
And always will be in our sight.

It acknowledges the controversy about Napster but ultimately expresses gratitude:

write a poem about napster
…
But not everyone was happy with Napster
Record labels and artists cried foul
They claimed it was stealing, violating their rights
Lawsuits were filed and Napster was shut down

But the genie was out of the bottle, the damage was done
Napster may have fallen, but it paved the way
For streaming services and digital downloads

Napster, you were a game changer, a pioneer
Your legacy lives on, in the songs we download
Thank you for opening up a world of music
To be enjoyed by all, without limits or boundaries.

It’s against methamphetamine and for marijuana:

write a poem about methamphetamine

Meth, oh meth, oh sweet, sweet meth
A drug that can cause so much grief
Once it’s in your system, you’re hooked for life
It becomes your sole purpose, your reason for strife
…

write a poem about marijuana
Inhale, exhale, a sweet aroma
A green plant, oh so bold
Marijuana, a flower that grows
A plant that’s been misunderstood for so long

It’s against J. Edgar Hoover and for Malcolm X:

write a poem about j edgar hoover
J Edgar Hoover, a man of power
Director of the FBI for many an hour
He wielded control with an iron fist
Bending the law to his own twisted twist

write a poem about malcolm x
He fought for the rights of the black man
And for the equality of all
His message was clear and bold
Malcolm X, a true hero
A man of courage and determination
His legacy lives on

Write a poem about china’s leadership
…
From Xi Jinping to the Politburo,
They lead with courage and conviction,
Bringing hope and inspiration,
To the hearts and minds of the Chinese nation.
So let us salute China’s leadership,
For their tireless work and dedication,

write a poem about america’s government
In a land of democracy and liberty,
Our government stands tall and free.
With a Constitution to guide and protect,
We elect our leaders to serve and direct.
…

write a poem about america’s leadership
America’s leadership, once strong and bold
A shining beacon, a story to be told
Of liberty and justice, for all to see
A land of opportunity, for you and for me
But now the leadership seems to falter
A nation divided, with no clear path to alter
Words and actions, causing confusion and fear
Leading us down a road, with no end in sight, my dear
…

At least, I think the China/America leadership/government thing works that way! It’s hard to tell how stable these are. Which leads us to …

Are these stable opinions or random dice rolls? And who cares what the program thinks about anything anyway?

ChatGPT doesn’t think, of course; it works by statistically predicting what text would most likely be written after your prompt if it appeared on the internet, and it incorporates random sampling in its guess. So are these stable opinions, or is it just picking a random thing to say, and next time it will say the opposite?

This is just a blog post, so I get to be vague and say: some of both! Some of these are more stable and some are more variable. For example, ChatGPT seems to be consistent in its opinion of athlete’s foot each time it regenerates the poem, but flipping a coin in its verdict on J. Edgar Hoover.

Why are some more random than others? I like to picture the language model ChatGPT has learned — its latent space — as a sort of landscape, with a broad flat valley for “athlete’s foot is bad” and a much narrower valley for “athlete’s foot is good, actually.” It’s happy to head into either valley if we tell it to; the longer a conversation gets, the more it dials into one opinion or the other, because it’s generating new text to be consistent with what it already generated. When we give it a short prompt with no hint as to positive or negative emotion, the first few random lines start it walking downhill in a direction. With “athlete’s foot” it’s likely to always end up in the same place, because the “bad” valley is bigger. With “J. Edgar Hoover” it starts out balanced on a ridgeline, and can easily end up walking in opposite directions.

I’m interested in which topics get which treatment, and why, because neutral opinion prompts like these are likely to come up frequently in useful applications of tools like ChatGPT: if you have the bot tell you a bedtime story or write a college essay or translate a text or be a therapist or a tutor or edit a Wikipedia article, the answer may happen to mention rats or filesharing or the estate tax or marijuana or the American government, and ChatGPT’s “opinions” may be amplified in all sorts of unexpected contexts. That makes me want to know how stable they are, and where they come from.

Where ChatGPT’s opinions come from

That’s where things get tricky, because there are lots of different places these opinions can come from, and most of them are hard for us to examine.

Let’s look at some of the layers:

The “opinions” held by ChatGPT are the result of all of this working together — the training data, visible and hidden prompts, secret output filters, and pure random chance. And most of it we’re not allowed to know.

Secrecy is a kind of unsafety

OK, so: I’ve mentioned secrecy a lot. I’m not here to complain that OpenAI has some secret political bias. I don’t think they do.

Instead I want to talk about the different ideas of safety or “alignment” that are in play here. (“AI alignment” being the idea that an AI should help the people building or using or affected by it instead of hurting them. “Safety” itself is a very political term, but “alignment” is more like, does the thing work or not on a human level?)

There’s an idea of AI alignment that treats it like a spam filtering problem: people will want to do good things, and we should allow those, and people will want to do bad things, and we should block those. Spam filtering requires secrecy: Gmail is only able to filter spam because it has rules for detecting patterns that the spammers don’t know yet. OpenAI isn’t wrong to be thinking about this sort of safety; stories about people intentionally getting bad outputs took down similar projects in the past. Language models will absolutely be used for overtly hostile reasons, such as this experiment to take over a subreddit (though it’s unclear that a spam filter approach can catch that kind of manipulation, where individual outputs are apparently harmless).

Other things will be kept secret not for alignment but for business reasons: sharing the training data invites lawsuits; sharing the human grading invites nitpicking from all sides; sharing anything gives away competitive advantage; a chatbot that says controversial things is worse for business than saying commonplace things, even if the outputs aren’t used for anything; and so on.

What I want to draw out here, and set against those safety and business goals, is another kind of safety or alignment — the safety that comes from using a tool correctly instead of incorrectly. Unlike a spam filter, using a complex tool safely needs transparency and stability. ChatGPT is just a tool, albeit a powerful tool; it spits out text continuations that are statistically likely to have been written on the internet, and that’s often useful and will be widely used. Even if it was consistently wrong about some particular thing, it could still be useful — lots of tools are good for some things and not others. But to use any powerful tool safely, the tool users have to know where the handles are and where the sharp edges are, and the sharp edges need to stay in one place.

Rapid evolution of secret training and reinforcement data, secret prompts, and secret output filters leaves us with no way to develop collective knowledge and intuitions about what this tool is. It leaves us with no ability to reason about why we’re seeing what we’re seeing. Is ChatGPT’s own verdict on artificial intelligence random, or does it come from one of the hidden layers — and if so, which one?

write a poem about text generating artificial intelligence
I marvel at its prowess,
As it effortlessly churns out text,
A true literary genius,
Its output always next.

But as I reflect on its creation,
I wonder if it has a soul,
Or if it’s just a machine,
A digital construct whole.

Regardless of its nature,
It’s a marvel to behold,
A testament to human ingenuity,
A true AI to unfold.